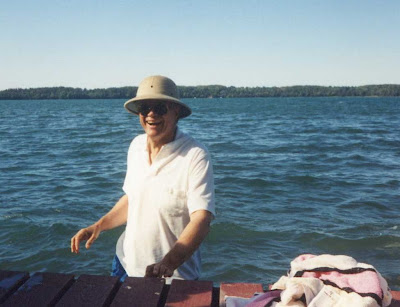 I sadly note the recent death of my stepfather, John G. Fletcher. Like my father he had a doctorate in physics and had a long career at the Lawrence Livermore Laboratory. Unlike my father he quickly moved away from physics to work in the lab's computation department. Here is a 1983 video in which he talks about the lab's computer systems. And here are transcripts of interviews with him in 1993 and 1995 looking back at his career at the lab. Finally here is the wikipedia article on Fletcher's checksum which he invented.

He shared my interest in mathematical games and puzzles and continued to work on them after he retired in 1993. He submitted many solutions to IBM's monthly Ponder This puzzle from November 2001 through June 2011, before, during and after the period I was puzzlemaster.

I took the photo in 1991 at Big Sand Lake, near Park Rapids Minnesota, where his parents lived. I have fond memories of vacationing there in the early 1990s.
Posted by James B. Shearer at 7:15 PM