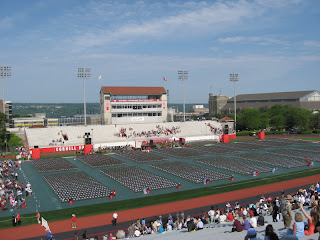 I attended the Cornell graduation over Memorial Day weekend.  There were 2 main events.  The Senior Class Convocation was on Saturday followed by the actual Commencement on Sunday.  Both were in an outdoor stadium.  The photo shows the stadium on Sunday morning before the graduating students file in and fill most of the chairs.

The main speaker on Saturday was Michael R. Bloomberg, currently serving his third term as Mayor of New York.  I thought his speech was reasonably good (as might be expected from a successful politician).  The main speaker on Sunday was the University President, David J. Skorton.  I was less impressed with his speech but perhaps he has other virtues.  In any case the main focus on Sunday was the graduation ritual itself.  First the thousands of students filing in and being seated and then the mass awarding of their degrees.

I stayed in a student dorm.  The accommodations were a little spartan (apparently indestructibility is still an important criteria) but tolerable.  There was a problem with the parking which was inadequate with no arrangements for overflow (at least that the staff on duty was aware of).  The campus and city of Ithaca looked interesting but unfortunately I didn't have much time to explore although I did catch some views of the famous gorges.

Posted by James B. Shearer at 9:55 PM No comments: